So this is life

Hi, there. Life has picked up the pace in the last couple weeks and we’ve been busy: nothing too exciting, but with full days nonetheless.

Buuuuutttt of course we still managed to have a few adventures at the beginning of this month. First up? Michael’s new(ish) love of carpentry led to this:

It ended up being no big deal but was more than a bit scary at first (the picture doesn’t do justice to the amount of blood in theT first moments after the accident). At 5.45 on a Monday afternoon Michael yelled for me to come quick: his chisel or scalpel or some such tool had slipped and he stabbed himself in the hand. His right hand was gushing blood and it was all over the floor in our porch area, which Michael has turned into a workroom of sorts. He then proceeded to tell me that he felt a little woozy, which: great, there’s no way I could ever pick him up if he fainted. So we called our friend Sean who put Michael on the back of his electric scooter and took us to the local emergency room. 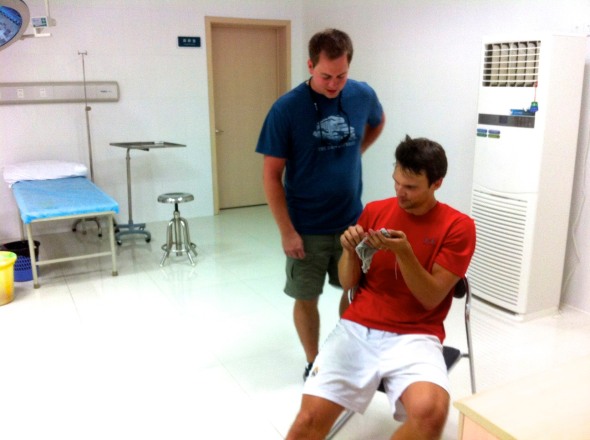 This nurse and another doctor cleaned Michael up and were ready to send him on his way without a stitch (it was fine but a pretty big cut which would definitely have had a stitch in the States). To save them face, I told them I was really worried about my husband and would they please just set my mind at ease and close it up? They rolled their eyes a bit at the picky American but stitched it up for us. We got out of there by 6.30 (in time for dinner with friend!) and for a total of about $30.

Not too long after our ER experience, Michael and I headed out to celebrate our fourth anniversary. We decided that we wanted to get away and so went to an awesome hotel located in another part of town, about 2 hours away (if you take public transportation,which we did that day….here we are on the bus).

It was awesome to get away: the hotel is beyond nice and we thoroughly enjoyed the change of pace and scenery. I’ve never just headed to a hotel for a night in the States but over here I end up doing it at least once a year, sometimes more.

This was the view from our room…

….and this is the view in the lobby.

I can’t say enough how much I love this hotel. The lobby is incredible to me because it’s very Asian and modern and sophisticated, but in a way that totally appeals to my Western tastes. I’ve noticed in the last couple of years that I’m developing more and more of a taste for contemporary art. I’m not sure if that’s because I live in Asia and see more clean, crisp, minimal scenes or just because I’m growing older and changing. Anyway, this hotel is the epitome of my appreciation for modern Asian decor.

We ate dinner that night at the hotel’s Japanese restaurant, which: please. Hands down the best meal I’ve ever had in our city. And that’s saying a lot as food in this part of the world is freaking incredible.

That’s it with us for now…. still hoping to put up pictures sometime soon of a few of my crafty projects from this fall.

Just married. Living in Chattanooga. Figuring out ourselves, each other, the future. Learning that being loved is sometimes harder than loving, that marriage is a whole lot of both fun and work. We were just glad to finally be together, on the same continent, facing job searches and dinner cooking and weekend adventures. We’d worked 40-hour weeks before, but this was different, somehow: life as real grown-ups. 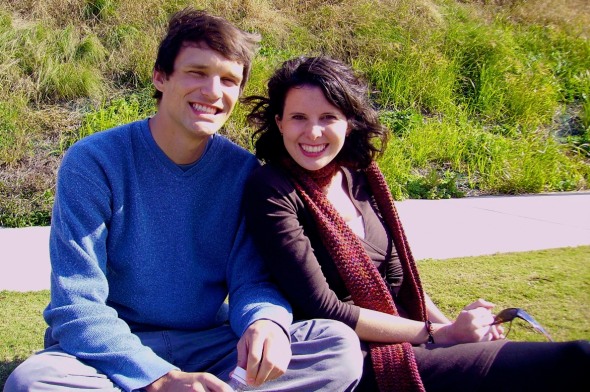 A time of transition, of setting our direction and working, together, to accomplish it.  This was a very in-between year; a period of looking forward but enjoying the present.

Adventures abound! We moved to Asia. Settled in. Adjusted to new friends, new schedules, new challenges and joys. Remembered why we came back and the unique joys and challenges of life in the east. Explored our world together. I remember lots of laughter from this year. Growing pains, yes (aren’t there always?), but mostly shared food and wine and fellowship.

The hardest, and maybe best, of all. We moved, again. Got a dog. Visited America (twice, actually) and then came home to Asia. This was the year, I think, when we really understood what it means to carry the other’s sorrows and to share each other’s joys. That it’s the two of us, in it for always, with each other. 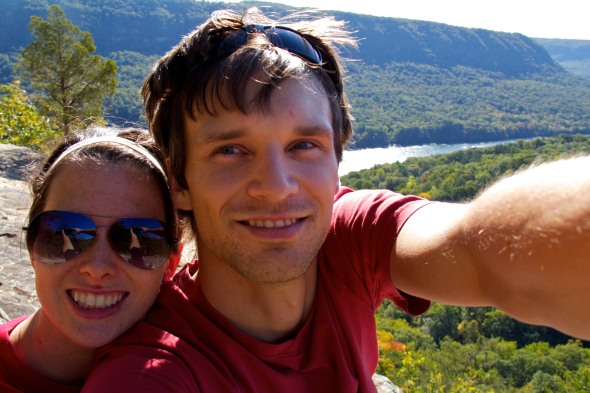 Happy fourth anniversary to us. Here’s to many more to come.