Hi, friends. This is Stella. She’s the cutest (always), the smartest (duh), and the sweetest (except for when it’s time to sleep. Grrrrr.) Tomorrow, she’ll be three months old. Can you believe it?

Michael and I are smitten with this little munchkin, and can you blame us? Look at that mug. Basically, she is telling us that her adorableness makes up for the fact that she hates tummy time with all the vengeance her tiny self can muster and that she is about to start screaming any second. Just wait: that’s how it goes whenever you flip her onto her stomach.

Life has been busy for us (isn’t it always?) since arriving back in Asia seven weeks ago. See our exhausted faces below, crammed on the subway at the peak of Friday night rush hour to celebrate our anniversary at the beginning of September. We were more than a bit tired that day and I’m afraid it shows. Our friends Craig and Sarah babysat for us so we could make it to the other side of town for dinner, just the two of us. It was our first solo outing since the babester and it was great to be together on our own (after we got off that blasted, crowded subway, that is.)

Five years! I’m thankful for this guy, and also grateful for the years we had with just one another before hopping on board the parent train. God’s plans are truly perfect. 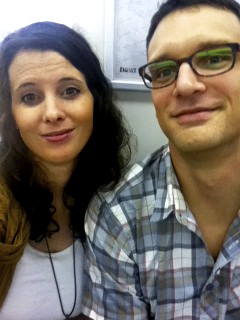 Stella really is a joy to be around. Her laughs, coos, and giggles are the best things in the world, and I never knew how much I could enjoy hanging out for hours with someone who can’t talk. 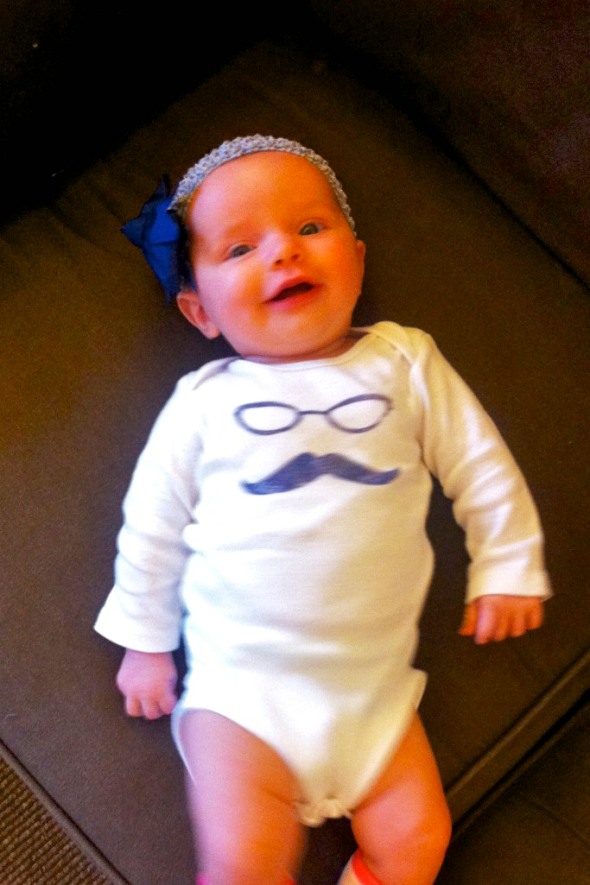 We continue to be amazed at just how quickly she is growing and changing. She was seven pounds when she was born, and she weighed in this past weekend at 13 pounds. Think about it: less than three months of life, and she’s nearly doubled her size! It’s the most normal thing in the world, but I am learning that normal doesn’t make it any less extraordinary. (Caterpillars turning into butterflies is normal, too, but wow! This world overflows with creativity and beauty.) 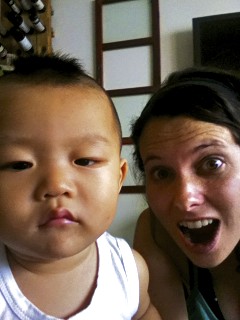 Stella and I have been making new friends. This is XunXun, a cute little neighbor boy who we’ve gotten to know since returning here in August. I’m grateful for his mom, who is joyful and open, and has welcomed me into her life with open arms. She’s introducing me around to other local moms, too, and gives advice without being bossy–a balance that’s hard to come by in a culture where so many people express their love and care of Stella by telling me that I’m doing it wrong. (Your baby is too hot/cold; she’s not wearing enough clothes/you shouldn’t carry her like that she is burning up; your baby is too young to leave the house; the stroller is unsafe; why does your family have a dog? that’s unhygienic!) Long before I had a baby, I knew this aspect of the culture would be a struggle. Most days I can laugh it off, but sometimes new mom neurosis gets the better of me and I wonder if Stella’s life really would be 100% better if I just made sure she always had on socks. 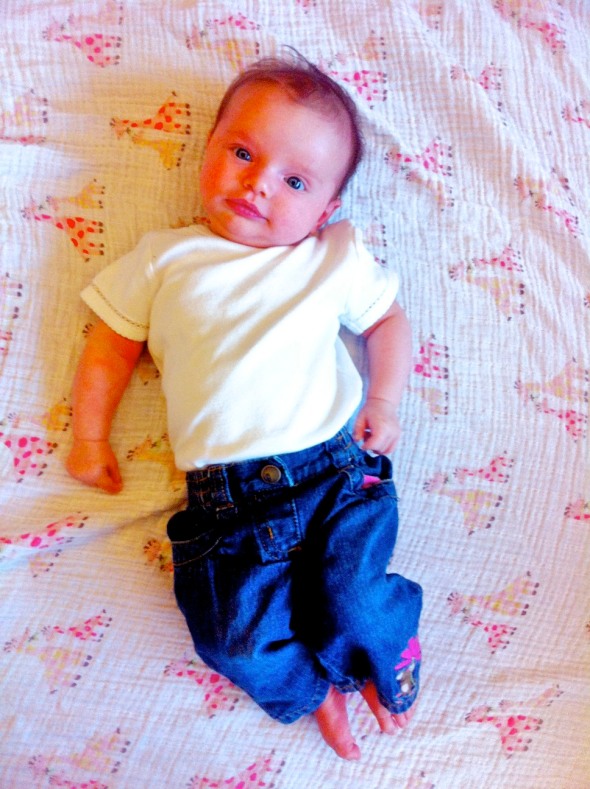 So, re: the title of this lil’ blog post. 100 Days: it’s a thing, and we’re celebrating. Stella won’t technically be 100 days until sometime next week, but Michael will be out of town for the week and I’m not gonna do it on my own. Locally, babies here are allowed out and about after 100 days, and most families make a big deal of this milestone. We will celebrate with a few friends. I’ve never been to a 100 Day celebration so this will be a learning experience for us (and I’m sure I’ll make at least a few cultural faux pas).

Other, random thoughts? I really, really love Stella’s baby leg warmers, and I think headbands might be a teensy bit tacky but I also love them and don’t care. Albus is adjusting well overall, but he’s a poor, neglected dog these days–I made it halfway home yesterday before I realized I left him tied to a tree outside the vegetable market. Confession: I didn’t even remember on my own, some passersby yelled at me from their scooter that I forgot my dog. Whoops! And Stella really is a sweetheart, but I will be a happy camper when she settles into a sleep routine. It’s three steps forward, two steps back: she slept through the night for more than a week straight and then reverted to waking up twice a night a few days ago. It’s hard not to feel like I’m doing something wrong which is keeping her (and us!) from sleeping well, but I also know that babies just change quickly and this stage, too, will pass.

That’s it for now. Life is good, and we are thankful. Oh! and hoping that neither Stella nor I catch the stomach bug Michael is battling. It’s a semi-regular part of life here, but would love it if you could say a prayer that it doesn’t latch onto either of us. And also that Michael gets better quickly!